The subject of dumsor came up briefly at our Friends meeting two Sundays ago.

I cannot remember the question she was responding to, but my fellow friend Edwina said something along the lines of:

“If you are sitting in dumsor and they are trying to tell you that there is no dumsor, why should you take anything they say seriously?”

It is deeply depressing (and actually really insulting) when – in fear of its potential effect on their power – our leaders deny the very existence of our problems. Or try to get technical about them, playing word games… with words that we created.

I’m not saying our government has done nothing towards ending the power crisis: things had improved until a month or two ago. I’ll do that rare thing and commend them for such small mercies.

However, when I am sitting in dumsor, don’t try and tell me that it is not dumsor. It’s bad enough that you haven’t solved our problem; don’t insult our intelligence/experience too. Just give us our dumsor schedule. You know: the one you won’t stick to anyway. Yes. That one.

We will be voting at the end of the year. I believe in actual choice, and I just don’t see enough difference between our two leading parties. Some – maybe – but little by way of genuine, inspirational, transformational leadership.

My dream candidate (another post for another day) would be a little more radical than Ghana is presently used to. For what should be obvious reasons, there are certain things he or she would ban senior government officials from access to, including:

I could go on.

I’m not saying politicians need to work for free, but we do need to find urgent ways of getting people to look at politics as public service and not some fast track route towards personal gain (or a way of repaying the massive debts our politicians incur in order to become politicians). And we need politicians who feel what we feel, and who put people over politics/money/resources as a result. 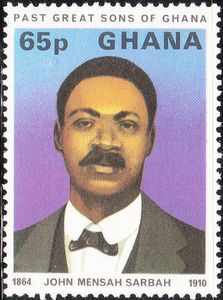 Example: way back in the day, there was a general belief that the social value of land was more important than its commercial value (you know… the kind of thing South Africa’s Abahlali Basemjondolo are all about). That alone is as good an example of people being more important than money as any. But that’s only the beginning of this story.

When the British colonial government basically tried  (with the Crown Lands Bill of 1897) to claim all land they saw just ‘sitting there’ (ancestral/inherited lands) for the British Empire, Ghanaians were understandably horrified. Patriots including John Mensah Sarbah founded the Aboriginal Rights Protection Society to shut that nonsense down, partly by:

Yet another example of putting people first.

After the Society campaigned successfully for the Bill to be rescinded, Sarbah refused to take any money for his role in their success, explaining that it was an honour to serve his people.

Now that’s leadership I can get behind.

Today we have a new national philosophy and it has little room for crazy ideas like public service and putting people first. It’s not Christianity: please. We might wear fine robes on Sundays, pray in loud tongues and such, but look around you: we are waaaaay too practical a people to actually practice such universally lauded religious principles as turning the other cheek or treating people the way we would have them treat us. Our society would look very different if we did.

No. Our real national philosophy is takashie: forcing our way ahead by any means necessary, often at the expense of others.

Where we have a choice between demonstrating a love of others or using takashie, the latter usually wins. Open your eyes and you’ll see examples, everywhere and every day. In little things. Like driving in traffic. In haggling prices. In (not) queuing. Etc, etc.

Each man/woman for him/herself and God for us all… and that’s the problem:

Takashie is an understandable response to the frustrations of living in Ghana. Nevertheless, our leaders come from among us. They are living reflections of what we really believe in: not as individuals, but as a society. If we each resort to daily takashie, why should we expect our leaders to – by some random miracle – do any different?

Sure: some countries are lucky enough to get officials who think differently and who help move their countries forward as a result. But that’s just it, isn’t it: luck. Such leaders are miracles.

Either we continue to get by on takashie, continue to produce more of the same leaders and vote them in with the expectation that they will suddenly and miraculously become benevolent (with enough competence to match that benevolence).

Or maybe we should all start thinking about our individual roles in changing the society out of which our leaders emerge.

4 thoughts on “Takashie is Our National Philosophy”