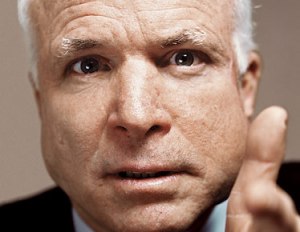 Q: Senator McCain, thank-you for taking a break from your busy campaign to fly out to Accra for this interview. Let’s jump right into it: Sarah Palin. The revelation of your new running mate was timed to grab headlines from the Democrats’ Convention, wasn’t it?

McC: I know. I’m very smart. It comes with age.
Q: Is the choice a reflection of Republican panic?
McC: Panic? *Laughs* I don’t panic, son. I was a Prisoner of War. *Adopts sombre tone.* Son, this is my gift to all those women who voted for my friend, Senator Hilary Clinton. Only to be rejected and spat on by Bobama. I don’t spit on women.
Q: Well, she seems very popular amongst Republicans: a true conservative. Does Palin actually share anything in common with Hilary Clinton though?
McC: Yes.
Q: What exactly?
McC: Well, she’s a woman.
Q: That’s it?
McC: Son, I have 20:20 vision and I assure you: she’s a woman. War sharpens your vision. I was a P.O.W, you know?
Q: So her being a woman is all that Palin shares in common with Hilary.
McC: Yup. Ain’t she great? Cute too. You know she’s a former beauty queen, right? The kids will love that. I’ve been told how you Ghanaians love your beauty pageants. Shame you can’t vote in our election! *Laughs again.*
Q: Erm, yes… but back to Palin. So you don’t think female Democrats will notice that Palin – unlike Clinton – is pro-hunting, pro-guns, pro-life, under investigation and probably pro-oil?
McC: Not really. Let me give you some insight that you’ll thank me for when you’re older: women are women.
Q: Women are women?
McC: Trust me on this. Women are not men. I’ve had plenty of time to think about this.
Q: I’m not quite sure I follow…
McC: Listen to me. It’s simple. Women didn’t vote for Senator Clinton because of her policies. They voted for her because she’s a woman!
Q: Erm, isn’t that a little insulting to the female Democrats who you’re trying to attract?
McC: Now let’s get one thing straight. When I want to insult a woman, I tell her to her face. Just ask my wife, Cindy. I was in ‘nam, for goodness sake. Let me be very clear on this son: I’m a maverick. I’m cray-zay! I do whatever I want. I will do whatever America needs me to do, and if that means insulting female intelligence then that’s what I will do. This isn’t a mid-life crisis. It’s the American elections and Sarah’s my girl.
Q: Don’t you think your wife Cindy might have problems with that?
McC: Son, that was a silly question. Don’t make me angry. You wouldn’t like me when I’m angry.
Q: I apologize. What about the inexperience that the Republicans have always levelled at Obama? Isn’t Palin even less experienced? Both nationally and internationally?
McC: Sarah’s not running for President. She’s running for Vice President.
Q: But – with you being 76 and with your recurring cancer problems – isn’t the possibility of her actually becoming President very real?
McC: So let me get this straight: you’re from Africa and you’re worried about my age? Don’t you guys worship old and dead people? Let me know, because I was thinking about getting a little shack in Gomoa Feteh when I’m done at La Casa Blanca.
Q: You’re avoiding the question…
McC: What? Are you trying to tell me something? Oh, I see it now. You want to kill me, don’t you? The Vietnamese sent you, didn’t they? You can’t kill me. Bloody Vietcong. I survived your damn torture camp, you bastards.
Q: Senator, I was merely pointing out tha…
McC: Security! This African just threatened to kill me. I think he’s Vietcong.
Q: But Senator, Vietnam isn’t even in Afric…

*Five burly security agents descend on me in slow motion from mid-air just before I wake up.*