I had this thing I did on my old blog where I would post ten tunes that I was really feeling (almost) every month. I figure now is as good a time as ever to start over… perhaps even more so because – although I am on radio – I really don’t get the chance to play what I want on-air: I think my bosses would spontaneously combust if I did. You should see them flinch whenever I even think the words ‘underground’ and ‘music’ in combination. That won’t matter after today. Right after this post, I’m drafting my resignation letter.

I’m so glad this song made it to the top of the US charts. It’s such a beautifully composed track and it’s been ringing in my head now for months. Personally, The Element of Freedom is the album I’ve waited for from Alicia for years. There’s so much more attention to percussion on it and Unthinkable (and Try Sleeping with a Broken Heart) showcase this to devastating effect. If this is the result of her relationship with Swizz Beats, then it will help me get over my broken heart (which is still healing after hearing about their relationship).

I don’t understand all the people who hate on Drake, especially considering his work on this (he co-wrote it and provided backing vocals).  As though that wasn’t enough, it has a thought-provoking video that adds a whole new level to the lyrics. 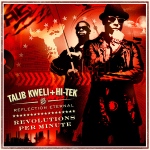 As a huge Soulquarian fan, the reuniting of Talib Kweli and DJ Hi-Tek is a big deal for me. Their new album Revolutions Per Minute is still growing on me. While I don’t think it’s anywhere near as repeat-listenable as their first collaboration, Train of Thought, Back Again (featuring Talib’s brilliant Idle Warship partner-in-crime, Res), Got Work and My Life have had me wearing out the rewind button on my car stereo.

Yep. I heard all the furore and how he lost his hood pass. I think he got caught out there trying to be too clever and ended up saying something fantastically stupid that made him sound like a complete ass. Yes. But that’s as far as I’m going to take it. If people can forgive R. Kelly for all of his dumbassery, then I can give Mr. Mayer the side-eye and appreciate the music… and Assassins is a great piece of music. I’m sorry, but it just is.

Wow. Remove the vocals and even the instrumentation in the background does it for me. Something about the chord arrangements. Reminds me of what I liked about TI’s ‘What You Know About That?’ but it has something of the 80s about it too. I think it’s the drum snap. Sorry… I’m geeking out. All that said, Slum Village are one of my favourite hip hop groups. In spite of the fact that they’ve lost two key members to heaven (including Dilla – one of the best producers of all time), they consistently churn out great hip-hop.

I melted the first time I heard this. And the second time. And the third… it’s amazing that there is anything left of me. Corinne’s voice kills me in a way that only Sade, Norah, Amel and Aya have ever been able to do and this track is the best of example of that. Everytime she says “I wanna get closer to you… baby” part of my soul wants to just move to wherever the hell she is on earth and grant her that wish.

Only I don’t think she’d appreciate a stalker.

I love Wale for this: his gift to all his fellow Africans. It was about time someone did something with one of the biggest and most-recognizable-to-anyone-from-any-part-of-Africa tunes – Bunny Mack‘s ‘Let Me Love You‘ and Wale delivers, complete with shoutouts to Ghana and Nigeria, references to West African parties, spraying and the line ‘You are not hard. You’re fufu soft’. Makes me proud to be African. The video’s cool too.

See this? It’s me jumping unashamedly onto the media bandwagon. As you probably guessed from No. 3, I can forgive a lot of assholery and when Kanye serves up a track this anthemic, my patience wears very thick. This reminds me of the Rocky theme tune. Or Eminem’s ‘Lose Yourself’. Kanye hasn’t done this kind of track since ‘Jesus Walks’. I like the Nina-esque handclaps too. And the rock sample (King Crimson, I’m told: reminds me of Led Zep, who… well… rock). The whole thing is like a musical middle finger to anyone who has anything to say to him. I was a little disappointed by the lyrics though. I thought he was supposed to be stepping up his rap game on the new album but this sounds a little simplified, if earnest. I liked the line ‘I just needed time alone with my own thoughts / Got treasures in my mind but couldn’t open up my own vault‘ though. Nice.

Man. Where do I begin? Okay, saw the movie. Too short and the narrative was too sprawling for me but it was TOO FUNNY. I was at the premiere and people only stopped clutching their sides long enough to give standing ovations. At the end of every scene.

In their kindness, Wanlov & M3nsa are selling both the DVD and its soundtrack for only GHc5. I bought it a fortnight ago and, after the umpteenth rewind, I realize that the music even works without the visuals.

If you want to listen to something that will give you an idea of what it is like to live in Ghana, acquire Coz Ov Moni (film and/or soundtrack) and prepare for a lesson.Unlike other Ghanaian rappers who boast or try painfully hard to be imitaition-American, Wanlov and M3nsa talk about real situations Ghanaians are familiar with – going to the beach (something we do every holiday), chop bars, sakawa (internet fraud), going to the club, African history, childhood games, la boro (borrowing), getting attacked by thieves… every song is based around a real theme Ghanaians go through or hear about everyday. And as if that is not enough, they use cool highlife-based beats and rattle off the whole thing in pidgin English (the real lingua franca of Ghana). It’s hilarious too: the sheer drama of the second verse of Beach Dey Jom and the whole of Mr Kwashay in particular. To quote Wanlov, “Mek I laugh in capital letters – HA HA HA”.

Like listening to American hip-hop and not getting all the references, you may not get everything if you’re not Ghanaian… and I think that’s the point. The whole project seems based around the notion of pride in being Ghanaian… even the mundanities of Ghanaian life. If there was such a thing as Ghanaian rap school, this is it: so many musicians here could stand to learn from this. Seriously: people need to study this. They should teach it in universities.

This is the only Ghanaian entry on my list this month: I’m not really feeling anything else I’ve heard this month. Nothing comes (barely) close.

I know: I’m betraying my British side. Whatever. The more I hear this song, the more I like it. It’s just fun. And I like the rock-out, drum-and-bass bit at the end. While this is definitely something straight out of Britain, I can actually imagine this having an international (ie. American…) appeal. Apparently, he’s Ghanaian too (not to be mistaken with Tinny, who really needs to stop with this ‘It’s a Bard Man Ting’. Please. I got over the spelling of your name but Bard? ) Oh. Just checked: he’s Nigerian. Anyway, between Lethal B, Sway, Dizzee (well, half of him), Donae’o, Tinchy Stryder and now Tinie (oh, and my brother too), it seems West Africans are cornering the UK rap charts.

I love everything Monae does. Art, energy and awesomeness on two legs. She appeared on Late Night with David Letterman recently. Letterman gave her his usual introduction but after her funkier-than-a-mosquito’s-tweeter performance, the man practically bounced out of his seat to remind everyone who she was, what her album is called and who she is being promoted by (“My buddy Sean”. That’s Diddy to lesser mortals).

If you haven’t done so already, bless your life by watching her video for Many Moons too. And if you don’t like it (or don’t at least find it entertaining), please don’t tell me.

Because I will probably lose respect for you.